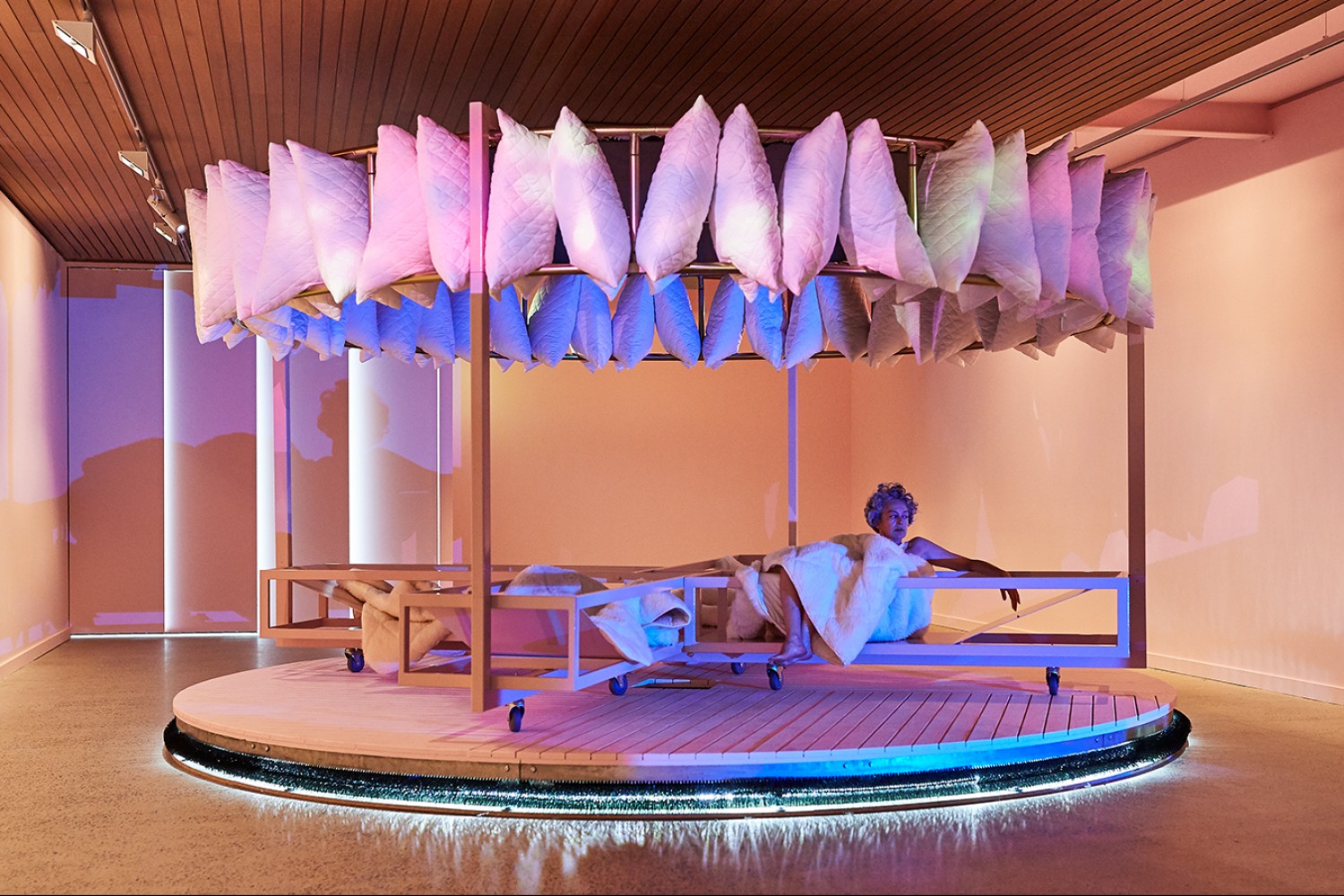 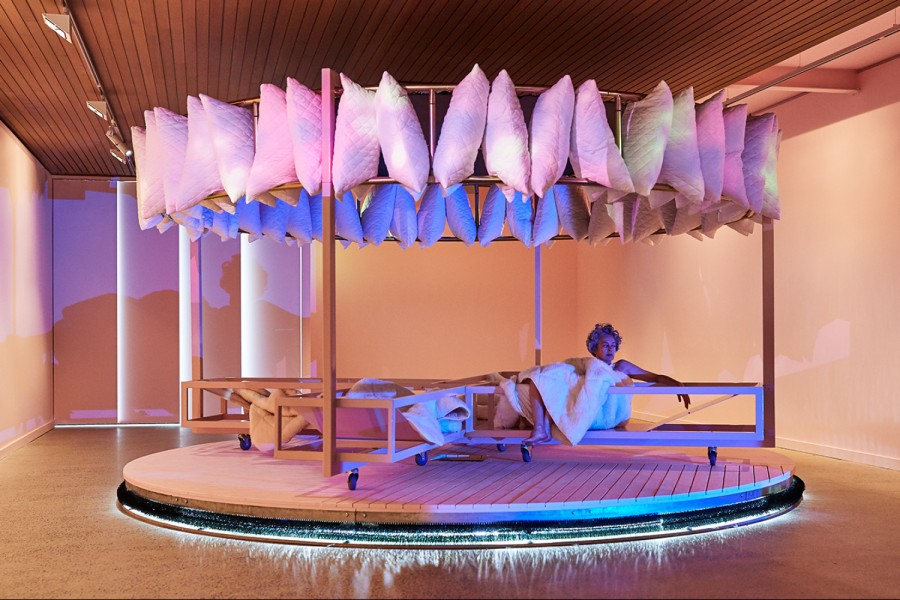 WAKING UP IN A DREAM
DORMITORIUM
RAY EDGAR
THE AGE
(2017)

Some people design a dream home around a library or a kitchen. The owner of the Garden Pavilion in Brunswick renovated in order to dream. An insomniac for 50 years owing to childhood trauma, he required a refuge to sleep.

"I needed to feel confident that I had a quiet, peaceful space where I could block out all the light and noise," says Brett Lockwood.

Beyond being simply tired, grumpy and vague, people with sleep disorders can have serious health problems. "Insomnia increases the risk of developing a variety of mental health problems," says Drummond. "There appears to be a causal relationship between insomnia and depression and anxiety. Meanwhile insomnia can exacerbate bipolar disorder, alcohol abuse and schizophrenia when someone is otherwise stable. Insomnia also increases the risk of accidents both at work, at home and driving."

Its total cost to the community is estimated at $10.9 billion a year, according to a 2011 report by Deloitte Access Economics.

Most people suffer through their insomnia or possibly resort to sleeping pills – "which we know does not have good long-term outcomes," says Drummond. "Changing your behaviour and environment is much better."

Regular bed times, abstinence from screens before sleep, exercise, meditation, removing stress and alcohol can all help. But how can design help improve an insomniac's environment?

Bloxas architects answered Lockwood's dreams with a system of blackened western red cedar shutters, selected for the soft timber's sound absorbency. The shutters close over double glazed windows. (When the shutters are open the bedroom/workspace fills with light.) Inside, an Akta plasterboard ceiling further diffuses sound. An "airlock" was created via two doors, 1.5 metres apart, that were recessed into walls twice the thickness of the rest of the renovation.

But complete silence and absolute darkness aren't the only methods at a designer's disposal.

Architect Matthew Bird explores some of the latest design thinking around insomnia in his speculative installation Dormitorium, made with the support of Drummond and fellow Monash University sleep researcher Professor Shantha Rajaratnam. The science of sleep concentrates on circadian rhythms, our body clock that's triggered by a triumvirate of light, temperature and noise.

Dormitorium is a playful combination of harem and merry-go-round. A rotating tent of 50 billowing pillows and multiple sheepskin-lined beds reminds us that the intimate space of the bedroom is one we share throughout our lives – from kindergarten dorms to international travel to hospital wards.

Bird's interest in sleep stems from a design approach. "I typically design a house from the bedroom out," he says. "I think of the master bedroom as the second living space." Already we watch television and play with devices in the bedroom and as homes get smaller, the bedroom's functions will only increase, he believes.

But it's in hospitals where light is being used to aid well-being and recovery by resetting patients' circadian rhythms. Our sleep cycle isn't just governed by night. Our bodies work on a 24-hour clock.

Light isn't just white. It's a spectrum of colour. Recent research contradicts long-held colour theories around the calming influence of blue and the stimulating powers of red. Measured in terms on the wavelength of light reflected from various colours, it found that the longer the wavelength (as in reds), the more calming the colour.

Companies such as Philips are redesigning lighting systems, exploring dynamic lighting in hospitals, while developing a domestic product called Philips Hue that allows homeowners to adjust their interior lighting in both intensity and colour, red included.

If this lighting research has the effect of changing thinking on interior design, it's already being used in interface design. Apple now incorporates a "night shift" option in its brightness settings to switch to a redder spectrum (apps are also available). No surprise, then, that Bird's installation is bathed in blush pink.

As Dormitorium rotates it also emits a low-frequency rustling sound, a further nod to sleep research. "A constant noise is much less disturbing to our sleep than a ballistic noise that comes in and out, and its volume constantly changes," says Drummond. "That's very disruptive to sleep, whereas a nice steady white noise – like a fan – can lull a person to sleep and drown out any external noises. Some people can't sleep with dead silence, you have to find what your own comfort range is."

During the night our body temperature also fluctuates, which is why fans, open windows and blankets are worth considering in aiding sleep.

If these design solutions focus on biology, Drummond also offers a simple tip on psychology: "Get rid of any clocks in the bedroom."

For insomniacs, the despair of a long night's journey into morning is only exacerbated by clock-watching, says Drummond. "Anxiety makes you more awake." 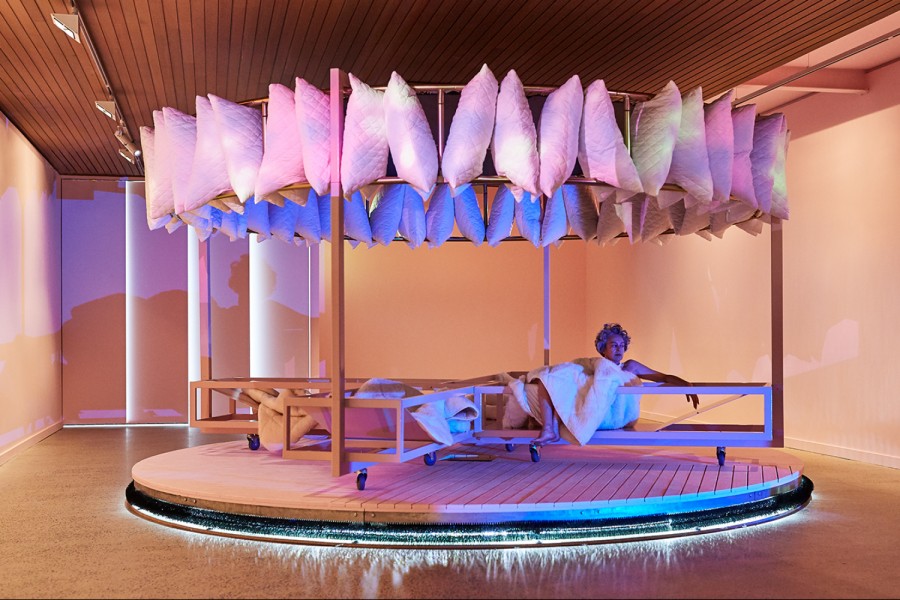