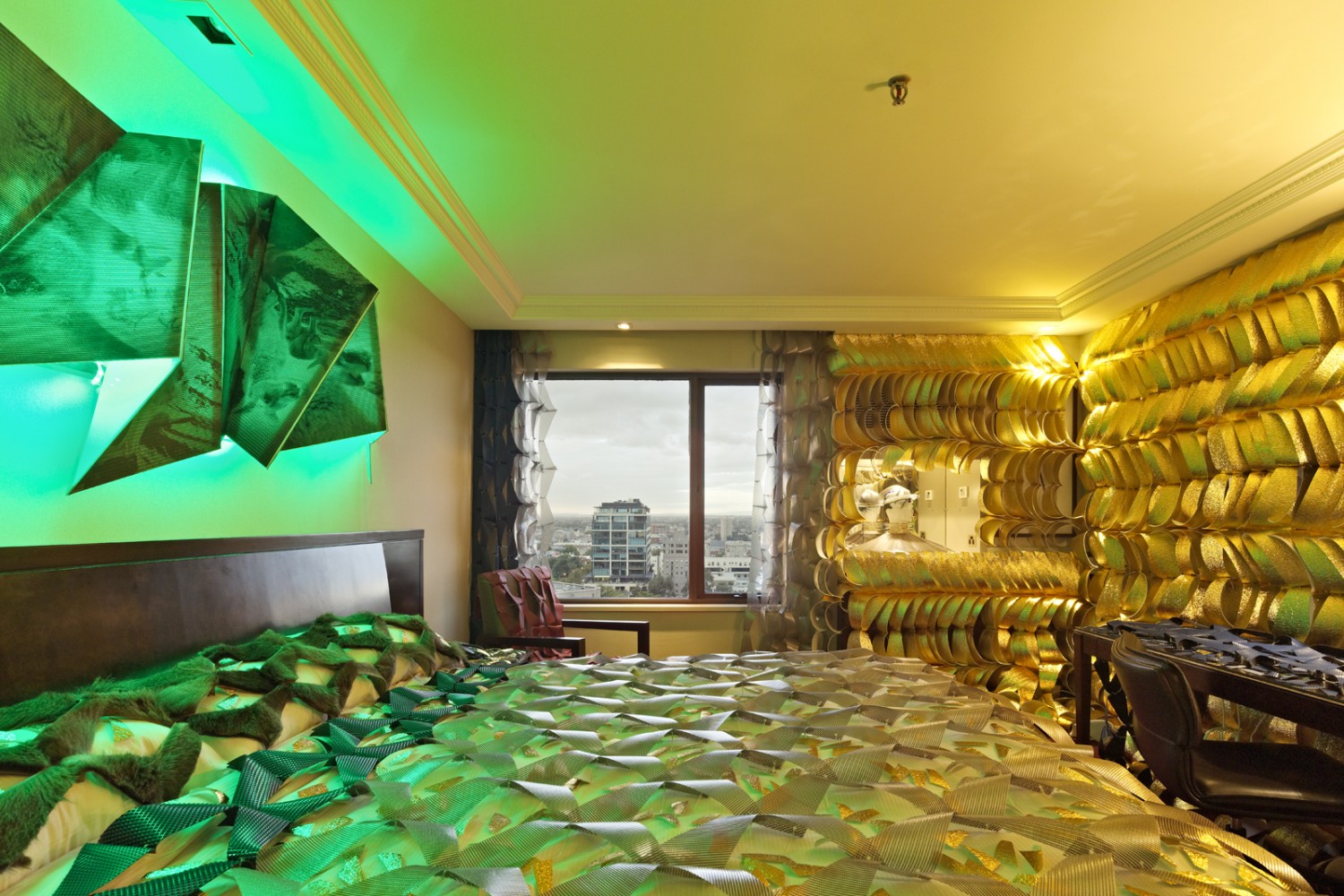 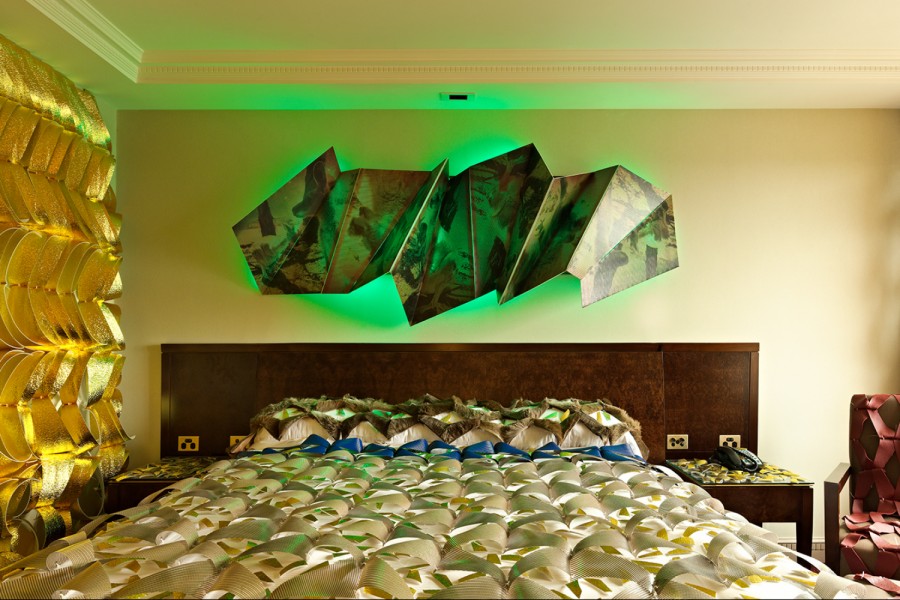 Hotel Otherworldly:
The Luxurious and the Site Specific

One does not often use the terms ‘guerilla’ and ‘anarchy’ to describe a luxury hotel experience. In much the same way you don’t typically imagine architects moving in secret, planning and scheming the reconfiguration of luxury hotel suites under the thin veil of a ‘do not disturb’ sign. But Australian based architect Matthew Bird has never really viewed the world of luxury through a conventional lens.

Hotel Otherworldly (2012), Bird’s most recent guerilla style architectural event, witnessed the secret hotel room transformation within an existing iconic Melbourne hotel, unbeknown to both management and staff. Planned for more than a year and installed over a period of three intense days, the project draws comparison to the practice of ‘Secret Wall Tattooing’, where artists install hidden art behind existing hotel room paintings and mirrors.

Hotel Otherworldly, however, manifested within the decay of an existing 1970s landmark Melbourne hotel and is intended as a new leisure oasis for the experience-seeking traveller. Sharing a significant lineage from Conrad Hilton’s original Hilton International hotel chain, namely the modernist incredibleness of Hilton Nile, Istanbul Hilton, Tel Aviv Hilton and Hilton Athens, which were built in privileged areas of historic tourist locations and to luxurious American standards. Each showcased American innovation and the power of the democratic west within an eastern exoticism.

Realised in the 1950s and 1960s, these buildings were seen as brilliant American air-conditioned aliens touching down in major historic centres for the privileged tourist to gaze upon from the comfort of their streamlined armchairs. The interior spaces, guest rooms, lobby, restaurants and pools were never devoid of regional reference and were often ‘decorated’ in abstracted geometries that typified each location. The Hilton Nile, for example, was richly decorated in abstract, handcrafted murals of hieroglyphics.

Hotel Otherworldly’s location of choice was a much later and less exotic 1972 derivative. Built within affluent East Melbourne, the building takes on Conrad Hilton’s principles of a privileged position and multilevel proportions, but drastically falls short in all other aspects. The brown brick, balcony-less and generic ‘anywhere in the world’ interior is far from the exotic and innovative ideas of its founder. Working within an existing typical ‘king guest’ room, Bird’s installation covers the existing décor with a repetitive trapezoid geometry, architect crafted in various locally sourced materials. The repetitive geometry plays homage to early European modernist facades but subverts bespoke décor with colour and texture that references indigenous flora, fauna, history and culture.

Native fauna references of furry wallabies and leaping crocodiles float within, folding and illuminating trapezoid wall artworks. The bedroom’s gold and green tones reflect the Australian floral emblem of golden wattle and the Aurora Australis (the southern lights), whilst subtly announcing a proud ‘Australian Made’ palette. Complemented by both blue and maroon the colours evoke Australia’s colonial and British royal family ties.

The bathroom installation is crafted from thousands of bubble wrap trapezoid forms articulating a surreal liquid soap foaming dispersion. The texture of the domestic shower curtain is reminiscent of the reptilian scales of the salt-water crocodile. Inventively, the bulk of materials used throughout the project were sourced from various DIY warehouse suppliers, along with low-cost construction materials such as gold floor underlay, plastic shade cloth and blue anti-slip rubber flooring. Further materials such as wallaby furs, automotive leather, brass washers, pink and clear bubble-wrap were all sourced from local manufactures as off-cuts. The low-cost materials luxuriously articulate throughout both the main bedroom and ensuite bathroom spaces. A local effigy, or perhaps an effigy of a future traveller, was crafted to guide the process of cutting and weaving over 10,000 trapezoids with over 7000 cable ties.

Fast forward to the future and we will see Hotel Otherworldly continue with the redesign of other aspects of the Hotel building (with or without permission no doubt). With Bird’s vision of transforming the building’s exterior with a balcony installation facade and the roof with a new entertaining ‘pleasure’ deck & pool. Further interior public areas will also be modified with the same textural vision and detailing.

In discovering Bird’s vision for Hotel Otherworldly and in understanding the move back towards the considered and the bespoke, we can’t help but wonder if the next generation of experience-seeking luxury hotel pilgrims will witness a departure from a current homogenised brand-led genericism, in favour of a more overt, Conrad Hilton-esque sensibility of the alien, the luxurious and the site specific.