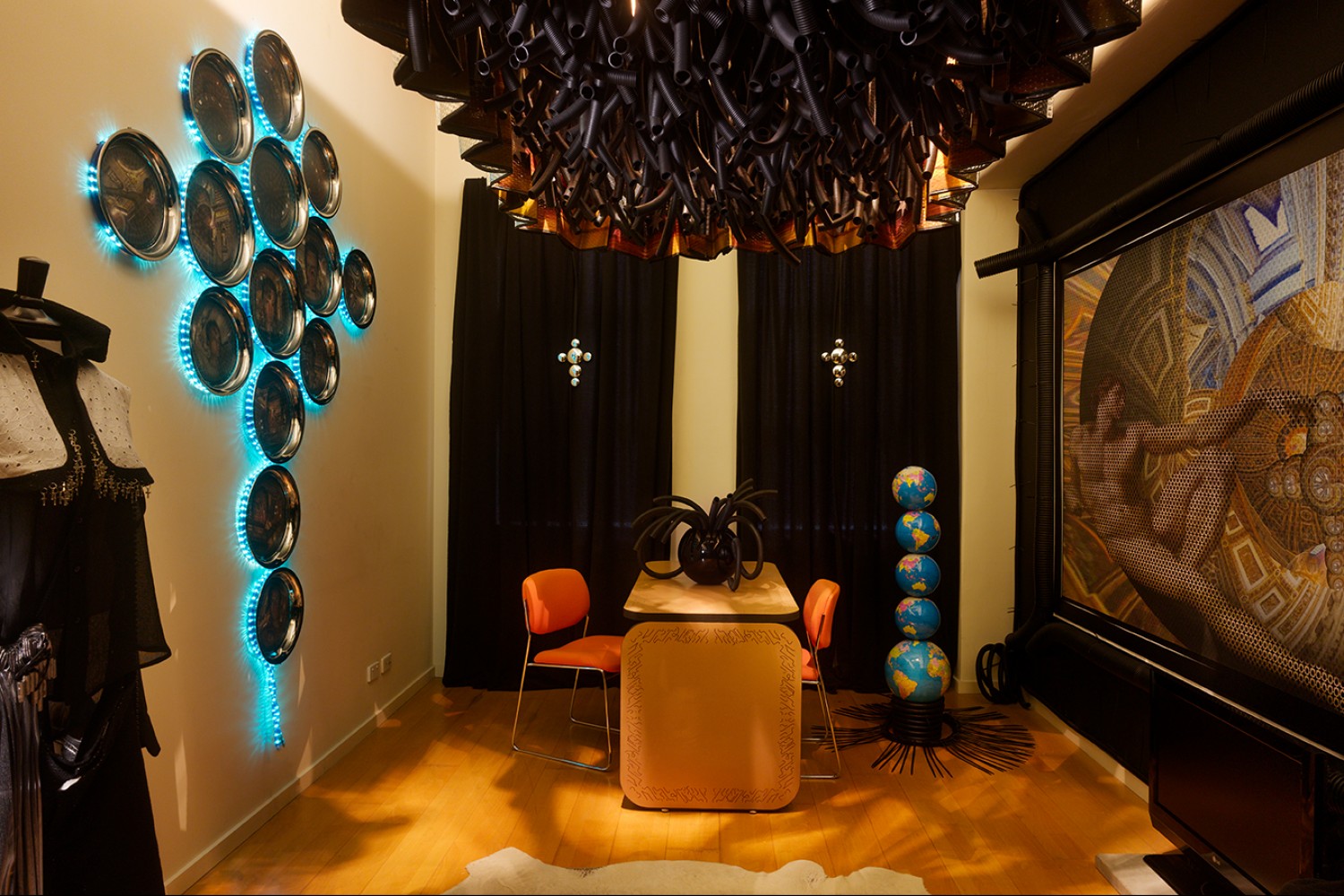 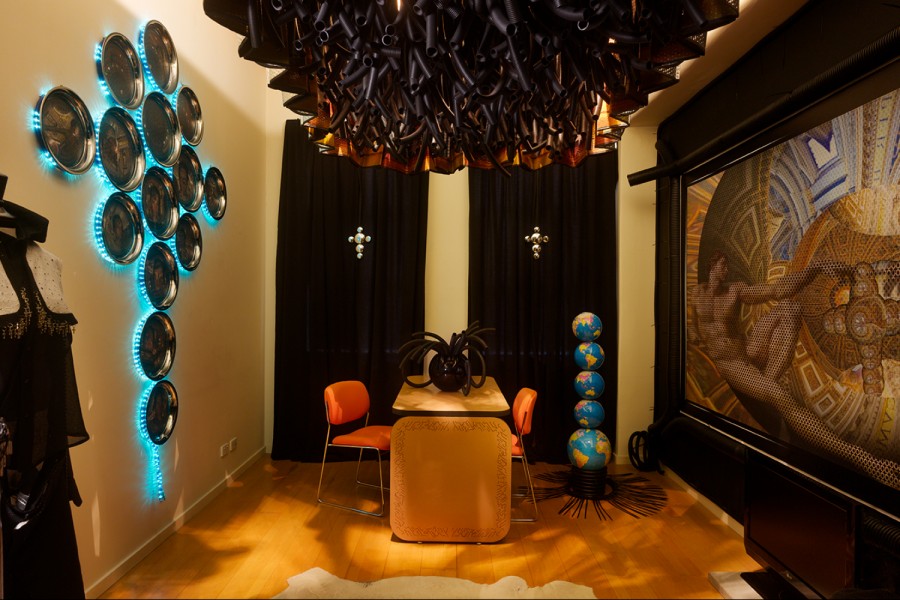 Matthew Bird’s decor is more ‘installation’ than interior. Don't go looking for suburban mainstays, such as the three-piece suite, sideboard, TV units or an Albert Namatjra print. Bird’s surroundings are one big artwork, designed to be transportable so that he can imprint his personality wherever he goes.

How many tenants do you know would go to this kind of trouble for a rented, one bedroom apartment? A mass of wool strands is suspended from the bedroom ceiling, there’s a Vic Market-sourced kangaroo skin on the bed, the walls are hung with digitally created egg images in recycled frames and polar-fleece curtains drape teh windows.

In the moody lounge room, the TV perches on a concrete paver found in the street and lugged up three flights of stairs. A forest of black diverter hoses, boarded with 52 reflective windscreen sunshades, hangs from the light. Furniture includes a ‘disposable’ low-slung freedom couch in a polar fleece type fabric, two recycled orange office chairs and a ‘doodle’ desk that Bird built from plyboard.

Dominating the space is a digitally enhanced mural of Michelangelo’s Creation of Adam. Bird, a great admirer of the artist/ sculptor, designed the interior of the apartment he calls Alphaomega with a modern day Michalenagelo in mind. Alpha is the first letter of the Greek alphabet and omega the last: the bedroom reparets creation, hence the egg symbolism. “The living room is the omega space, like the dark and the sister afterlife,” Bird says. “I wanted to have a beginning and an end to the space.”

Good design can be original and inexpensive, yet portable, says Bird. At 28, he has worked in London and is still transient. He wants custom-made surrounds, but he wants to be able to personalise his next space with them, especially if it’s a used-and-abused rental property. “This was a typical rental apartment,” Bird says. “With scratched floating floorboards, cream walls and concrete ceilings, which I've painted.”

Bird’s philosophy is also a critique of many DIY projects. “Maybe I'm being arrogant, but the projects on many DIY shows look terrible. They lack love. I know it comes down to money - you get sophistication if you hire a professional - but you can do it yourself and you can do it cheaply, rather than slavishly copying. “If you use your creative head, you can come up with an individual, personalised space. I didn't set out to do what I did. It evolved as I went along, filling space with installations and completely camouflaging the rental home.”

Bird spent five weekends trekking to Bunnings for the hose because he underestimated the 300 metres he needed. He also toted home two shoppings bags of about 100 balls of feathery wool to create his bedroom art. Hooking the wool into wire under the existing downlight panels took about two weeks.

“Wool has ephemeral qualities”, Bird says. “It’s warm and nesty and helps to bring down high ceilings.” Fourteen Autobarn hubcaps with self-portraits of Bird at St Peter’s Basilica are outlined in LED lights to give the effect of disapperating perspective. Round, rear-vision mirrors in a cruciform configuration spin against the dark curtains. His “topiary’ comprises five staked world globes from the Reject Shop, set on a base of splayed, black cable ties. A bouquet of diverter hoses in a black vase sits on a chrome trolley.

Bird’s understanding of topiary harks back to his childhood. He grew up in a traditional, bayside Gerogian-style house and his mother Helen made a dried topiary. “She has an artistic eye and is interested in ornament and the idea of decoration. She really picked up on the fact Georgian covered a range of other things including oreintal influences.”

Bird worked for three years with architect Cassandra Fahey, once his lecturer, and well-known for the house with teh Pamela Andrweson facade. “I'm completely in awe of Cassandra’s designs,” he says. “Her approach is research- driven”. He credits Fahey with inspiring him to think beyond the typical domestic interior when she entrusted him with the graphics for two projects: The Smith Great Aussie Home and New Gold Mountain Bar.

His mural - created with 3D modelling software - is veiled with a pattern to look like perforated mesh. It was printed on stretched vinyl billboard material and installed by Creative Visuals, the same company who printed the Pamenal Anderson house facade. It spurred Bird to shape his own business, Studiobird, to incorporate graphics in architecture, art and interiors.

Bird works part-time with another architect he admires, Howard Raggatt of ARM and lectures in interior design at RMIT University. His big love is resort hotels, he wants to design one like The Exoticus, a project he did as a student, which looks like an imaginary spaceship that landed in the Kimberley - further testimony to the unbridled imagination. As Bird says: “A space is as good as the person who lives in it.” 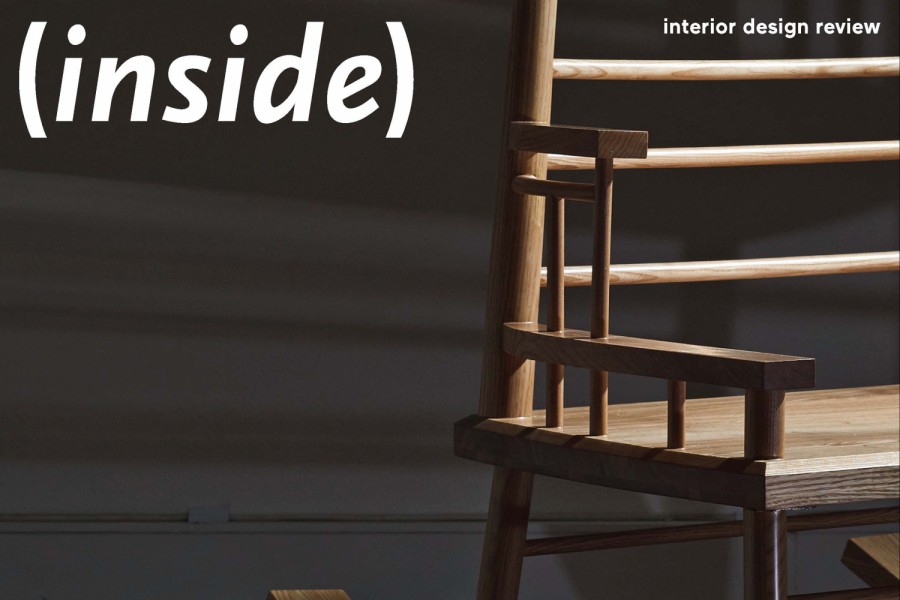